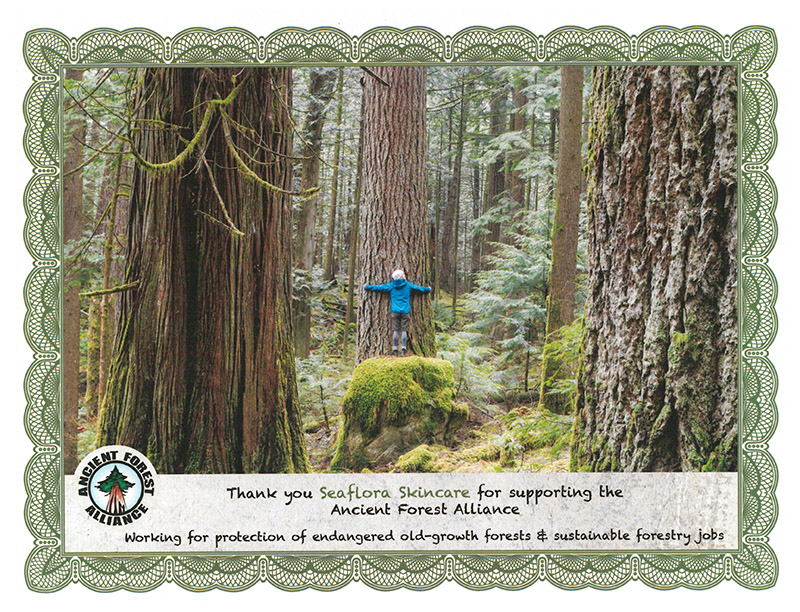 5% of all online retail purchases at seafloraskincare.com for the month of May will be donated to The Ancient Forest Alliance in support of their efforts to save B.C.’s endangered old-growth forests.

“Seaflora Skincare is committed to the ecological preservation and sustainability of the environment. Year round we work to protect our agricultural lands, rural countryside, coastlines and marine ecosystems. From start to finish, Seaflora is committed to bringing you skincare that is healthy and nontoxic to your body and earth-friendly at the same time. As residents of Vancouver Island, supporting the efforts of the Ancient Forest Alliance is our duty!” – Adam Butcher, CEO at Seaflora Skincare Inc.

The team at Ancient Forest Alliance is calling on the BC government to:

If you are inspired to volunteer with The Ancient Forest Alliance click here for details to get involved in the campaign to protect BC’s endangered old-growth forests and ensure sustainable forestry in the province! To volunteer, please contact [email protected] and let them know whether you are in Victoria, Vancouver, or elsewhere, and if there are any specific volunteer positions that interest you. They thank you for your support!

If you are too busy and still want to help, you can be like Seaflora and donate here.

It only takes a few seconds to send a message or sign a petition so there is no reason not to. Ancient Forest Alliance has made it very easy to help save out old growth forests.

“Unfortunately, the current BC government still clings to the notion that major industrial logging of endangered ancient forests is still an ethical and viable undertaking – which it is not. The history of high-grade logging of the biggest and best old-growth stands in the valley bottoms and lower slopes in BC has resulted not only in the increasing collapse of old-growth ecosystems – as indicated through the decline of spotted owl, mountain caribou, marbled murrelet, and wild salmon populations – but also in the forest industry’s diminishing returns as the remaining trees become smaller, increasingly marginal, and more expensive to reach on high, steep mountainsides, resulting in the collapse of rural forestry employment. Look at before and after maps from 2012 here.

We’ve got our work cut out for us.  However, the Ancient Forest Alliance has been working hard not only as the lead organization, but as the ONLY organization focused exclusively on achieving comprehensive legislation to protect BC’s old-growth forests and ensuring a sustainable, value-added second-growth forest industry.

As a young and nimble organization, we’ve employed a significant amount of creativity and innovation in our approach. We are working with non-traditional allies including green businesses, forestry workers, unions, First Nations, and faith groups; extensively using professional photography and videography to share spectacular images of our endangered forests globally through the news and social media; creatively nick-naming places like the “Avatar Grove” and “Big Lonely Doug” which have gone viral and helped to raise widespread awareness; using a remotely-piloted aerial drone to monitor and document with incredible HD video our most magnificent ancient forests; and undertaking highly effective, door-to-door voter education campaigns in targeted ridings to hold elected politicians accountable – which we can do as we’ve opted-out of having charitable status, which restricts most environmental groups from engaging in more direct but effective political advocacy work that influences government policies.”

Right now, the hottest issue is the plan to clear-cut old-growth near Port Renfrew and Juan de Fuca Marine Trail.

Plans to auction off 109 hectares of old-growth forest adjacent to the Juan de Fuca Provincial Park have outraged conservationists and tourism operators.

The seven planned cutblocks, two of which come to within 37 metres* of the Juan de Fuca Provincial Park boundary near Port Renfrew, would see an estimated 55,346 cubic metres of old-growth – the equivalent of over 1,300 loaded logging trucks – leave the region known as the Tall Tree Capital of Canada.

Opponents charge the B.C. government and Forests Minister Doug Donaldson have demonstrated a lack of political will to preserve the endangered forests.

“The provincial government has a blind spot that they are not willing to address,” said Andrea Inness, a representative of the Ancient Forest Alliance.

“They won’t even acknowledge that there’s a problem and keep hiding behind misleading statistics that paint a very rosy, and very false, picture for old-growth forests. But if you dig down you can see they just don’t get it.”

Inness said the government will say that 55 per cent of the old growth on Vancouver Island is protected, but they fail to acknowledge that some forest types have already been devastated by logging.

“If you look at the coastal Douglas-fir forests, for example, less than one per cent of those forests remain,” she said.

Inness added that the 55 per cent figure is also misleading as it includes already protected areas like the Great Bear Rainforest and other forest types like the sub-alpine and bog forests that have no commercial value and were never threatened.

The government’s move to auction off the current cutblocks came with no public consultation, said Inness and were discovered when environmental groups studied the 2019 schedule of work published by the B.C. government’s logging agency, B.C. Timber Sales.

B.C. Timber Sales is the B.C. government logging agency that manages 20 per cent of the province’s allowable annual cut. It recently came under fire from a host of environmental agencies for what Jens Weiling of the Sierra Club has described as “flying blind into terminating the old-growth web of life.”

In a review of B.C. Timber Sales’ sales schedule, environmental organizations Elphinstone Logging Focus and Sierra Club B.C. found the provincial government agency is proposing 2019 cutblocks across the last intact old-growth rainforest areas on Vancouver Island adding up to more than 1,300 hectares–an area equivalent to the size of more than three Stanley Parks.

The move to cut down old-growth forests is also of concern to tourist business operators in the region who contend that the standing trees have a far greater value than the clear cut lumber they will provide.

“Port Renfrew, a former logging town, has successfully re-branded itself in recent years as the Tall Tree Capital of Canada and is seeing a huge increase in eco-tourism, greatly benefiting local businesses,” said TJ Watt, a photographer and advocate for old growth forests.

“This logging will impact Port Renfrew’s reputation as an eco-tourism destination, not to mention the impacts on the environment.”

Soule Creek Lodge owner John Cash said he is deeply concerned and disappointed with the planned logging in an area adjacent to his tourist attraction.

“My business relies on tourists who come to admire the big trees and old-growth forests. My business doubled after Avatar Grove was discovered,” he said.

“Instead of old-growth clearcutting right up to a provincial park boundary, the B.C. government should be helping rural communities like Port Renfrew transition to more diverse and sustainable economies. People don’t come here from all around the world to hear the sounds of old-growth being cut down.”

Cash said despite the NDP’s promise that they would make forest conservation a priority, their actions have not reflected that commitment.

Both Cash and Inness have called upon Forests Minister Doug Donaldson to cancel the old-growth timber sales before the closing date for bids on April 26. They say that, instead, the minister should move to protect the area and consider incorporating it into the boundaries of the provincial park.

A spokesman for the Forest Ministry responded with a statement that confirmed the sale of the cutblocks, reiterated the government position that 55 per cent of old growth forests are protected and said that ending logging in old growth forests would affect people engaged in the logging industry.

* Note: Two of the seven proposed cutblocks fall within 50 metres of the Juan de Fuca Provincial Park boundary, not 37 metres as stated in the article.

A work forever in progress

The AFA looks forward to more progress and success, thanks to their supporters who are the foundation for an organization like no other, working tirelessly to save the last stands of the most beautiful ecosystems on planet Earth. See some of the biggest stompers they’ve come across here.